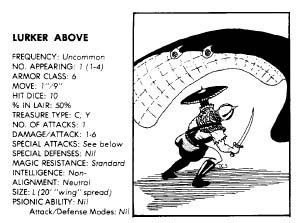 Mord Mar is done for the year due to holiday commitments. That means I have time to sneak in another Monster Monday! Recently, my son Hanson was reading the Monster Manual and came across the Lurker Above. As many of you know, I am a big fan of trap monsters.

The trap monsters share a common trait: they look like something natural or wanted in the environment. Mimics shape-change to doors, chests, desks or anything else that would attract adventurers' attention. Piercers look like stalactites. Shriekers look like a larger fungus in an ecosystem where fungi is king. The Lurker Above looks like the ceiling in any underground room.

The Lurker Above predates modules, and even AD&D. Its first published appearance was in Strategic Review #3 (Autumn, 1975). Three other "trap monsters" made their appearance with the Lurker Above: Shambling Mound, Piercer and Shrieker. The other monsters included were: Yeti, Leprechaun, Ghost, Naga, and the Wind Walker (Expect a Monster Monday on this obscure thing!)

By this point, D&D was an underground sensation. And the clamor for more was readily apparent in the Strategic Review. Gygax was in full DM mode. He was scouring everywhere for more creatures (why else would the Leprechaun be statted?!) But, the trap monsters were a big hit. They make for interesting encounters.

D&D, in its earliest days, boiled down to characters versus environment. Monsters weren't antagonists, they were challenges. Lurkers Above and the other trap monsters cranked the environment's ruthlessness up. But, because each one is so specialized, it would be redundant to give you my typical "how I use this" section. Instead, I will leave you with a partial list of the trap monsters that show up in my campaign.

I also use disease creatures (green slime, rot grubs, cerebral parasites and others.) But, that's a different topic.

When you get ready to use a trap creature, always make sure you are describing whatever they are mimicking several rooms before the party reaches the surprise. You hope their guard is down by the time they reach the room. And they don't get to complain about "no warning."

Posted by Jayson "Rocky" Gardner at 3:17 PM No comments: Links to this post

Early D&D was dotted by long campaigns. Both Gary Gygax and Dave Arneson had sprawling campaigns with many moving parts. Ernie Gygax later had the Hobby Shop Dungeon. My own Mord Mar campaign has run for many years, in many iterations. But, each builds off the previous. Others too have run campaigns for years.
This is one of the true joys of Dungeons and Dragons, and is often lacking in games today. In the beginning, the multi-generational campaign was hard-wired into the rules. As an example, I quote Blackmoor: "The Order is structured in such a way that there is only one man at each level above the 6th (Grand Master). At such time as a 6th-level character gains sufficient experience points to rank as 7th level he temporarily gains the appropriate attributes. He must then seek out the Grand Master of Dragons, and defeat him in a fair fight. There will always be a higher level to fight, even if there is no player character in the role." (Page 4, referring to monks).
Arneson's rule allowed the return to the spotlight for long retired characters. It created adventures. It made previous adventures seem important. These things are not possible in a series of disparate campaigns.
Even Wizards of the Coast jumped on the verisimilitude bandwagon. They released products like Return to the Temple of Elemental Evil. The Expedition series followed in much the same vein. WotC counted on these products to draw in older gamers. They did.
5th Edition is using the nostalgia in a completely different way. Curse of Strahd, and Tales of the Yawning Portal are almost the original modules re-written for 5th edition. They do not pull history of players into the books. Instead, they push the books' histories into the players.
This has been an important strategy to bring new players into the game. And it has worked. D&D and the RPG industry is as strong as it has ever been. But, its been built on the history that came before today. Even the rules set is primarily built from the previous rules iterations.
With this in mind, how does a modern DM incorporate the past into the future? That's the crux of this blog. Here's some strategies to help with both published adventures and home-brew campaigns.
1. Tie-in early. Add a Tarroka reader into the Rise of Tiamat. Use words like "lineage" and "bloodline." Don't give information on the current adventure. Let the players wonder which adventure is actually being run.
2. Use the "Masters' Rule" from Arneson where appropriate. Druids and Monks both have a tradition of seeking out their betters. Both can have supernaturally long lives. Even paladins and warlocks may have a similar system. Return the PCs to the game if you can.
3. Start and end your games in the same world and region. In your epilogue session, mention who has settled down, and who had kids. Try to tie these into previous characters. If Bill played a Dragonborn last adventure and is playing a human this adventure, maybe Karen is playing Bill's Dragonborn's daughter.
4. Cross-contaminate artifacts. If the players have the Sunsword after Strahd's defeat, have Acererak send his undead minions to claim it at the beginning of the Tomb of Annihilation campaign. If a character sees that weapon as their birthright, they will be in high gear to track it down.
5. If old PCs are still alive, have them show up. Maybe a chance meeting at a marketplace. "I knew your mother, she saved my life many times. I hope your group is as tight as we were." "You're adventuring with a Bucklebeer? Watch that one. His father once stabbed me for a magic ring." Let the old stories seep into the new game.

6. Have re-occurring villains. Not in just one adventure, but many campaigns. Strahd, Tiamat, Acererak and others are basically immortal. They have powerful minions that can show back up too. "Your grandparents thwarted our destruction of this realm. I only have vengeance for you now!"
7. Keep the retired adventurers who became queens or emperors on their thrones. Give the PCs some latitude when dealing with them. "Your uncle helped me gain this throne, and I shall repay the favor." Just make sure not to give too much.
8. Have a location that shows up in every campaign. One that is affected by the adventurers. Maybe they broke a hole in a wall. Let them know they've been there before.
9. Have a construct that shows up again and again. Maybe it was a stone golem that the fighter removed the head of. The next generation runs across the same golem, now with a bronze head, and a club that has its previous head at the top. A subsequent generation finds the same golem, now with a mithril arm too.
10. Keep notes of the changes your players force upon the world. There are several websites available for this, and I use Obsidian Portal. Find one you like and keep extra notes. Review them before the next story, and re-use interesting elements.

Part 1 can be found here. Part 1 covered OD&D - 2E (including Holmes, Mentzer and Moldvay). I started this way back in August. Things got busy with the kids going back to school. I finally have the time to wrap it up, so here it goes.

Third Edition gives us an interesting tidbit (PHB, pg 87), 3.5E has identical wording (PHB 102): "Standard characters are good or neutral, but not evil. Evil alignments are for villains and monsters." This is a new statement, not seen in previous editions. 3E also gives us some great baseline ideas for good and evil. (PHB, pg 88): "Good characters and creatures protect innocent life. Evil characters and creatures debase or destroy innocent life, whether for fun or profit."
Third Edition also tags an ideal onto each of the nine alignments: LG "Crusader," NG "Benefactor," CG "Rebel," LN "Judge," N "Undecided," CN "Free Spirit," LE "Dominator," NE "Malefactor," and CE "Destroyer." These tags seem misleading to me. For the first time, it feels as if an alignment is an absolute. LG's tag carries a religious overtone. N's tag makes them seem wishy-washy. Instead of describing the characters, these tags seem to limit the imagination.
Why does my N druid carry a tag of Undecided? Instead, I will take the CN tag of Free Spirit. That's more interesting for sure. My dwarven fighter isn't a "Crusader." I guess I will make him LN so he can "Judge" the evil of my enemies.
Third Edition does do some things very right with the alignment system too. At the end of each description, it gives a "best alignment" statement. Well, for good and neutral anyway. Evil alignments have a "most dangerous alignment" statement.
Overall, Third Edition does a good job of explaining how alignments behave in the world around them. The rules mention that people will not always follow their alignment to perfection, and that is to be expected.

Fourth Edition splits from the 9-point (and even the 3-point) alignment systems drastically. Instead we get a 5-point system: Good, Evil, Lawful Good, Chaotic Evil, and Unaligned. Alignment gets barely 3 columns in the 4E PHB (19-20). In this edition, the alignment system is not a guide for playing the characters, but instead seems to be a tool for the rules. "For the purpose of determining whether an effect functions on a character, someone of lawful good alignment is considered good . . . a lawful good character can use a magic item that is only usable by good aligned characters."
Fourth Edition may have done some things right with the alignments. I have never played the system. Regardless, the alignment system is not build off the previous versions of the game. 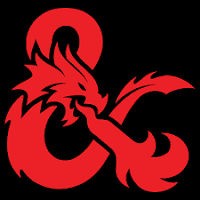 Fifth Edition returns to the 9-point alignment system. Again, alignment scores only a little over one-half of a page in the book (PHB, 122). But, even with the truncated text, there are a couple of important points that can be applied over all editions.  "For many thinking creatures, alignment is a moral choice. . . According to myth the good aligned gods who created these races gave them free will to choose their moral paths . . ."
"The evil deities who created other races though, made those races to serve them. Those races have strong inborn tendencies that match the nature of their gods."
In addition, 5E keeps the unaligned tag. It is reserved for creatures incapable of making ethical or moral choices. Sharks are given as an example. An apex predator that lives to hunt, but cannot choose not to do so.

Each of the editions changed the way we look at alignments. Some do it better, some worse. But, alignment is a fundamental core of D&D and is a necessary part, regardless of era or rules set. Without alignment, moral decisions become boring. Demons and devils just become a different type of dragon. Kings become more two-dimensional. Alignment, like every other piece of the rules, is a tool. To often, it is disregarded in favor of simplicity. This is a detriment to players, the game and stories everywhere.
To be a great player or DM, the alignment system needs to be understood, if only so one can know when to disregard its interaction with the game.

-Rocky
Posted by Jayson "Rocky" Gardner at 12:53 PM No comments: Links to this post