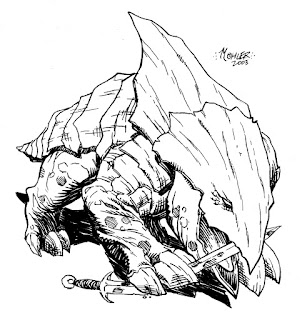 What's the difference between puzzles and traps in an adventure? Both can create impasse in a dungeon or adventure. Both can be solved with creativity and multiple solutions, if the DM stays off the rails. In our opinion, a well crafted trap can be puzzle. This is a difficult thing to achieve and not all traps make it possible. Some traps just go off with minimal options to detect, avoid,or avert. But a well crafted puzzle and trap can provide the players the opportunity to do all of those things. 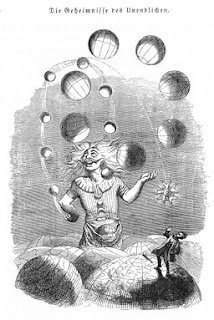 For example, the very first room in the Swords and Wizardry introduction adventure, Hall of Bones, provides the players an opportunity to find and disable a trap. This puzzle gives the players the opportunity to experiment. It meets my puzzle standards as well, it provides clues to its use, it can be solved without any character necessary skills, and it leaves the potential to hurt the players if they make a mistake with it. Well-crafted puzzles and traps make the players think and allow them to use their wits to survive.

Puzzles can be a long term process or single room affairs. In the Mord Mar megadungeon, there is a demon locked in time fighting an angel. Players often spend time experimenting with this puzzle but it is not one that can be solved immediately or even needs to be. 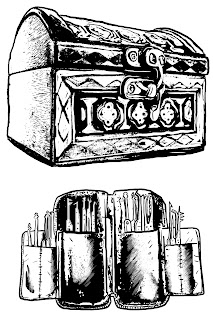 This is an important consideration when making puzzles; are they going to prevent the players from moving on? What do I do if they are 'stuck'? This emphasizes our philosophy on puzzles which is: a good puzzle must be challenging and solveable. We all know the 13 year old self of a DM who creates a puzzle so difficult or obscure that the players cannot solve it! "Ha, I beat you!," is not a philosophy to be sought after when using puzzles. 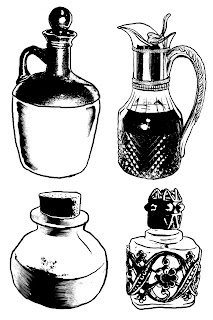 These smaller puzzles that make up an excellent game should be like the overall plot or arc of a campaign and allow players to challenge themselves and struggle  while still achieving a solution.

The origins of D&D focused on the problems and their solutions rather than the dice. A good puzzle will not rely on a game mechanic or mechanism to be successful. Even running 5th Edition or Pathfinder, I will grant bonuses to players that accurately describe what they're doing and characters that probe for more information rather than relying upon dice rolls and skills.

Silvery Moon Tavern, my (Rocky's) newest supplement is off to the editors. It was a difficult process to complete the book, and I thought some of our fans may be interested in what goes on behind the process. 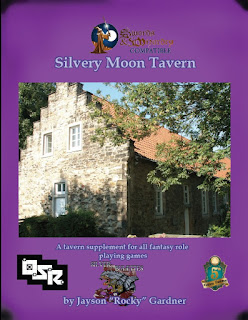 The first step of any book is an idea. After Gamehole Con in November, Ian, Jake and I were discussing what's next. We have created a city that our adventures revolve around. The Orbs series and the Blood Pharaoh both have ties to Redstone. We decided it was necessary to begin detailing what Redstone is. Through that, we decided there are a few almost must have locations in an adventuring area. The tavern sounded interesting to me, so I started it. We also have long term plans for shops, the castle, the temples and churches, and guilds.

Moving the project forward immediately became difficult. As the holidays loomed down, family, friends, and work took more and more of my time. But, I still was able to get a bit done here and there. An outline, a couple of lines, ideas for artwork were accomplished in the scant minutes available.

As January's cold grip took hold of Michigan, I started to write. Slowly at first, but gaining momentum as I saw the pages fill up. As January turned to February, I was still writing, but also re-drafting as I went. When I couldn't write, I worked on the cover, changing colors a dozen times, the layout 5 times, and the font at least 3 times.

Redrafting is important. I didn't even have a first draft done when I started the second. That's my process, though. I am constantly going through and re-reading, making sure that similar ideas are in one paragraph, not three, separated by two other ideas. Even as I finished the "final draft," I still went through and read again. I'm not a master of the craft, and every time I read it, I still find mistakes or ways to tighten up wordings.

Then I released some screenshots to the community. The background I loved made it too difficult to read. That's a hearbreaker sometimes. But, when striving to make a product better, you HAVE to listen to the people that take time to give you feedback. They are the ones that will be using the product.

Finally, I have two versions ("color" and B&W) of the book, nearly finished. I am just waiting on edits and maps to finalize the product. As you can see, it is a long process. One that involves joy and sorrow. When the book hits OBS and the GaryCon Dealer Hall, I hope you all enjoy it!
Posted by Jayson "Rocky" Gardner at 4:29 AM No comments: Links to this post

Blogger isn't playing nice right now. Here are some more pictures of prizes for the module writing contest. These will be given to 2nd place.

The text list: Castles & Crusades Player's Handbook, Classic Monsters, Monsters and Treasure, and A0-12. These have been donated by Ian McGarty for the contest! 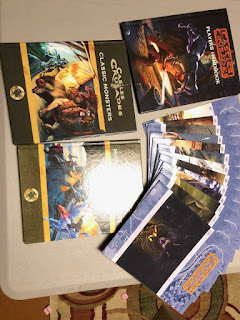 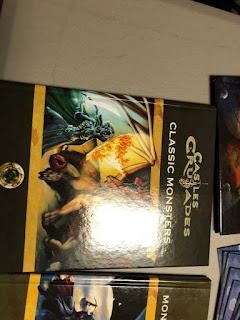 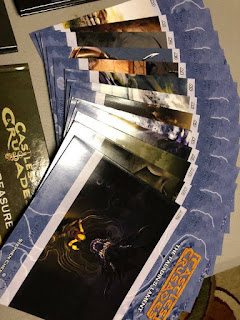 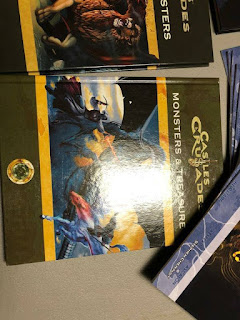 Posted by Jayson "Rocky" Gardner at 12:27 AM No comments: Links to this post